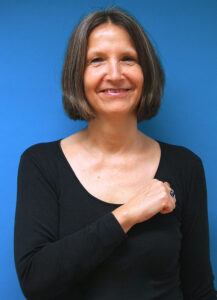 My name is Angela and I am working in Tanne - Swiss Foundation for Congenital Deafblindness as a professional for nearly 17 years now. I started as a caregiver in a residential group for adults and – after my master studies at the University of Groningen (NL) in Communication and Congenital Deafblindness - I became an adviser and supporter in communication and interaction.

My hopes and dreams for the next 10 years for DbI are that all people working in the deafblind field do know the DbI Network and have a sense of belonging to it. Further on that, they can easily find inspiring ideas and partners within the Network for their daily work.

My name is Barbara McLetchie. I am from the United States. For many years I coordinated the graduate program in Multiple Disabilities and Deafblind at Boston College. I still have the pleasure of consulting for Perkins International and value my connections with so many DBI friends and colleagues.Thank you for letting me share some of my DBI memories.
My first conference was in 1999, Lisbon Conference at Casa Pia. Thanks to Mike Collins, I was on the Scientific Committee and the theme was “Developing Through Relationships. “. Relationships is the heart and core of all our work with each other and with people who are Deafblind. The Scientific Committee put me and Isabel Amaral in charge of organizing the program. I still remember using index cards to assign workshops, an old strategy but it worked! Who better than Dr. Jan van Dijk to set us off with his presentation on relationships and a response from Dr. Cathy Nelson. I was fortunate to stay at the same hotel as Dr. van Dijk and his wonderful wife Riet who had so much experience in assessment. Every evening in the bar they shared so many stories with me and 2 of my graduates from Boston College and many others who gathered around until the early hours of the morning. Marianne Riggio introduced me to Beroz Vacha from the Helen Keller Institute, Mumbai. Beroz was so charismatic and was always promoting and mentoring younger people. She was so excited to tell me about Namita Jacob and Sampada Shevde from India with whom I continue to have valued personal and professional relationships.
I was on the Scientific Committee for the World Conference in Canada. The Canadian mounted police carried the flags of all nations I loved working with Carolyn Monaco, Linda Mamer, Stan Monroe, Inger Rodroe and Graciela Ferioli. Graciela has always added so much joyful energy and spirit to DBI. Sheela Singh from Mumbai made a wonderful video and gave a heartfelt presentation on “Communication Is Trust.” Trusting relationships were highlighted.
In 2017 Marianne Riggio from Perkins asked me to be on the Scientific Committee for the first DBI Conference of the Americas. People from all over the region and the world journeyed to Cape Cod, MA. The theme was Partnerships for Lifelong Learning. Marianne invited Dr. van Dijk to attend and had many conversations with Dr. van Dijk and he was excited to be part of the conference and had a support team to come with him. Sadly, Dr. van Dijk passed away in January before the conference but Dr. van Dijk’s vibrant spirit was with us. Partnerships and relationships among us energized family members, Deafblind people and professionals.
Our work is all about relationships! Relationships are what DBI always values.

Life and Experiences of Daniel Álvarez
(including my relationship with DbI)

Hello, I am Daniel Alvarez and I was born in Spain in 1952. I belong to the Acquired deafblindness category becoming totally deafblind when I was 35 year old.
This fact absolutely changed my life, so I started to search for
training in several international organizations in this field, being
later decisive my participation in the First European Deafblind Conference
in Gotemburg, Sweden in 1985. There I discovered which would be my future life- to start with the development of programs for deafblind people.
I went to the ONCE (National Organization for the Spanish Blind), where
they were very receptive and agreed to start with the Deafblind Department.
Our objectives were, the development of services for congenital and
acquired deafblindness, focusing the priority on the training of
specialized professionals, including my own training by assisting several international activities and training courses (specially from the Perkins School for the Blind). This work was growing
slowly, but quite well,
With time, the Deafblind Department was able to incorporate more
professionals and to work with a multidisciplinary team and in the year 2000 it was incorporated in the management of Social Services, with the name of UTS
(Unidad Técnica de Sordoceguera - Technical Unit of Deafblindness), and became the Unit of reference of the professionals of this Institution in all of the country.
In 1988, with the training of the interpreters for deafblind people, we
were able to start specific activities for the adult deafblind and the first
step was the founding of ASOCIDE (Asociación de Sordociegos de España - National Association of the Spanish Deafblind) in April 1993 which follows the philosophy that always the deafblind people have to assume and manage the Association by themselves. I was the head of both UTS and ASOCIDE. I retired from the UTS in 2010 and from then on dedicated myself entirely to ASOCIDE.
I participated in several events in international organizations, gave conferences, workshops and seminars (EDbu, WFDB / signer of the founding of the WFDB and first vicepresident /New Zealand, 2001)
In addition to the above, I have been very fortunate to participate in Dbi activities.
- I went to the 3rd International Conference of the IAEDB in Potsdam (Germany) in 1992. The title of the conference was " Access to context: A basic need for Deafblind people". I was honored to be invited to give a plenary session based on the title of the Conference.
- At this conference, the IAEDB management committee decided to select Spain to organize the 4th European Conference on Deafblindness , under the title: "Discovering the wor(l)d together" and the Family Camp. During the days before this conference the management committee met and set the basis for what was going to be a fundamental change towards becoming DbI. DbI was founded in 1997 in Madrid where its Statutes were approved and ONCE was chosen as a Major Corporate Member by the new management committee. This was a new way to run the organization incorporating more members in the management committee..I represented ONCE in this committee
The 4th Conference of the IAEDB (here the organization started to call itself DbI and not IAEDB) had an innovating scientific program that included, for the first time, not only themes about congenital deafblindness but also professionals from the acquired deafblindness field were invited to participate and continued to be invited to the new international Dbi conferences from then on.
Networks: I was also member of some of the new networks that were being created like EDbN (1994) representing deafblind people and later of ADbN, network of acquired Deafblindness.
I've written various articles on deafblindness, some of them have been published in the DbI Newletter
Greetings and Long and Successful Life for DbI!

- Let's walk this path together -

In my career I have attended several DBI conferences. Each conference has its own personality based on the host country and the hosts.

My favorite experience was in Romania in May of 2015.
The city was beautiful, and one day several of us went to Bran Castle. Not only was it fun to see, but I really enjoyed spending time from a social point of view with ELPS that I had not seen in a very long time!
I have a lovely photo representing more than 12 former ELPS. What a gift to see them all together. This was impressive but more impressive was the work they were all doing in their respective countries. They shared their work in conversations, but also in presentations during the conference. I sat together with colleagues from all over the world who were not ELPS but close friends as they visited us in the Deafblind Program at Perkins. They also shared so many ideas as part of their creative presentations; these will always be remembered as “best practices” across the world of Deafblind education.

Lastly, as part of the Plenary Session, I was sitting with a friend of mine from Boston College. Dave Power was presenting awards. As he was announcing the Anne Sullivan Award, someone sounded familiar… yes, it was ME. I cried and hugged my colleagues from Perkins International as I climbed the stage.
This was my very most memorable moment… 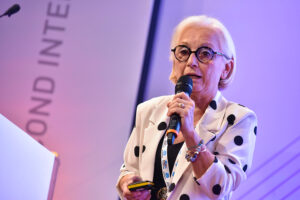 My name’s Patrizia Ceccarani and I am the Scientific Director of the Lega del Filo d’Oro Foundation, which is Italy’s reference point for people with deafblind and with multisensory disabilities since 1964.
I met DbI in 1980 (then called I.A.E.D.B) at the Hanover Congress.
In 1984, at the International Conference in New York, I spoke at the Poster Session to talk about the reality of people with deafblindness in Italy.
Later I collaborated to start the 1st Workshop on Usher Syndrome and participated to almost all the DBI international events, presenting posters and papers.
Furthermore, in 2009 the Lega del Filo d'Oro, on behalf of DbI, organized the 7th Deafblind International Conference "Tides, waves and currents, in research and action”, at the end of which I was awarded by the Boston Perkins School for the Blind the “Ann Sullivan Medal”.
The DbI events that took place in Romania in 2015 were very interesting and full of stimuli for my work, because I had the opportunity to deepen the topic "Charge Syndrome". In Denmark, in 2017, I presented two important the Lega del Filo d’Oro researches: “ISTAT Research and future scenarios” and “Applying Social Impact Assessment methodology at Lega del Filo d’Oro (SROI)”.
Over the years, I have become a member of the DbI Networks: Usher, Charge, Research & Technology, and this made possible a real deepening and updating of the topics.
The events and initiatives of the DBI have been a personal and professional growth for me, especially for the human side. I knew and met experts from all over the world, creating relationships that have been consolidated over time, sharing experiences, knowledge and operational methodologies. By joining forces, we want to help people with deafblindness and their families to a better life.
My path within DbI is a continuous enrichment journey.

My name is Ivana Macokatic and I come from Croatia. I would like to share some my experiences of being the member of DBI and enjoyable moments I had during Dbi conferences.
Being member of DBI is very important to me as a professional but also to me as a person. I became a member of the DBI at the conference in Slovakia in 2005. That was a time when I was just starting my work with deaf blind children and I did not have a lot of experience. It opened the whole new world to me. It was a long time ago, but I do remember clearly one situation: while waiting for the lecture on “Traces in Memory” I was looking at people around me communicating in sign language so fast and fluent - that was the moment I will never forget because I was aware that my knowledge and experience in that field was modest and being surrounded by all those professionals inspired me to learn more and continue to grow as a professional. Seeing the lecture and discovering how traces in memory can be done through all everyday activities stuck with me forever. From that day on, through the network of colleagues and professionals that was made through DBI and attending the conferences I learned so much and remained strongly connected to the field of deafblindness and DbI itself When talking about conference moments. - there are so many memorable moments where professionalism, friendship and laughter are intertwined. I hope that next time we will have chance to meet in person, have a coffee and share those moments.